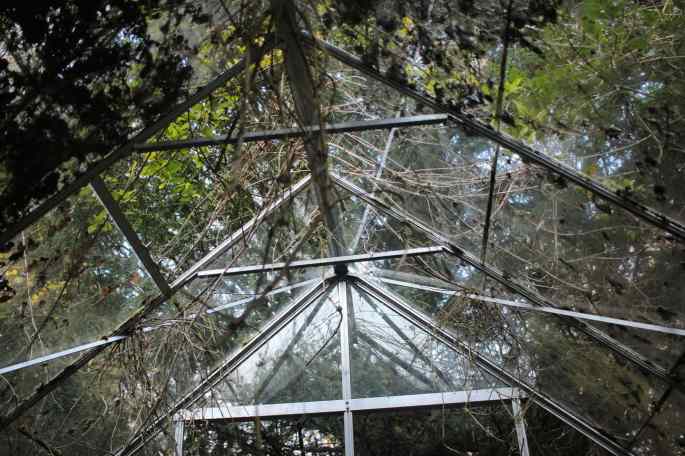 These greenhouses remind me of man made skeletons, prefabricated corpses of the Anthropocene, lost in the heart of the forest, with their discarded metal bones forming the framework for a new organism. Branches investigate through the roof, and the overgrowth burgeons on each side. What remains in the contents of their bellies, a time capsule of semi preserved material… broken furniture, decades old newspapers still spouting the same trash that they currently do. A children’s picture box, repurposed as a spider’s nest. Piles of miscellany which you could be sure were hiding a murder victim’s remains. On that point, I am sure that when I arrived here, I saw someone move through the forest. A brief, dark blue blur which moved away as I spoke. This place had a different, slightly darker vibe than the last. Especially with the smashed in car parked outside and rotten garage, unlocked and full of waterlogged, decaying family memories. 😭😬 Who were these people and why was the property left in such a state? It’s almost like they just upped and left. Or maybe they died.
I found an old videotape, and a plastic ice cream tub containing dozens of vintage Spanish matchboxes, each with a beautiful design on them.
Will try to post them at a later date.

Please like/ share if you enjoy these posts. I will be posting more frequently some more explorations into hidden/ lost/ remote and unpopulated areas. 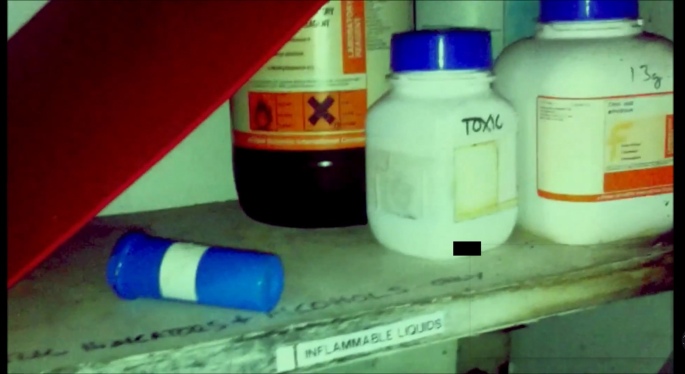 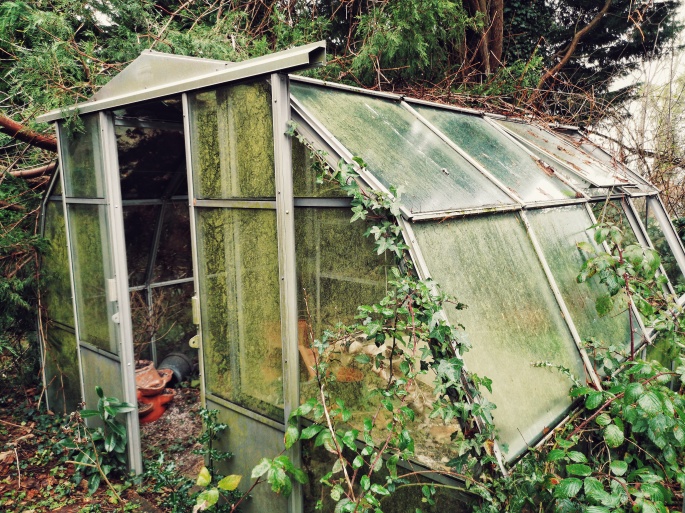 My journey into the unknown continues, marking out the waypoints and boundaries in this transformative liminal space of grief. It has led me to an abandoned greenhouse, in the grounds of a forgotten house.

It is a space in which inhabits the culmination of my research so far. Life being one plane of focus in the abstraction of the infinite.
Like vitricolous lichens pioneering colonies on the surface of glass.
It is a permeable ecosystem, a ruin of care where light can enter from every angle. It is a place where absence lives. 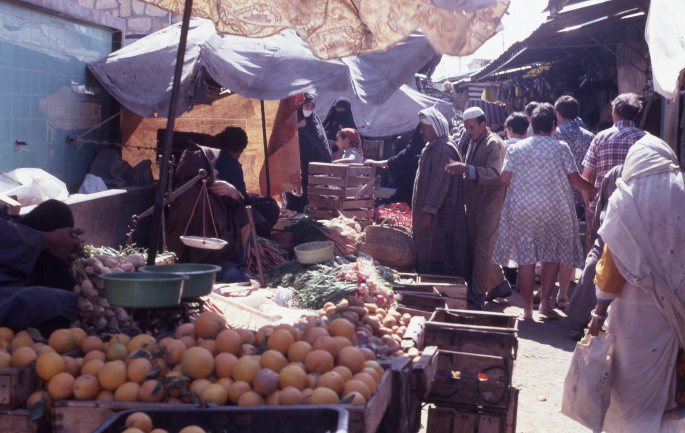 First Series from my 35mm slide collection that I have digitised. scanned at 4800dpi using an Epson flatbed scanner with slide mounts, so I can scan 12 images at a time. Pretty much perfect for my intention with these. This series is from a market in Inezgane, Morocco, and potentially a couple from Agadir. Dated 1991. I really enjoy the warm quality of the colour pallette in these, and interesting to see the fashions, lifestyle of the time just a few years before the advent of the internet had gripped the world. There is a sense of warmness and community to the interaction between the people in the photos.

All images © Thomas Sidney and http://www.tombenjah.com , 2019. Unauthorized use and/or duplication of this material without express and written permission from this site’s author and/or owner is strictly prohibited. Excerpts and links may be used, provided that full and clear credit is given to Thomas Sidney and http://www.tombenjah.com with appropriate and specific direction to the original content. 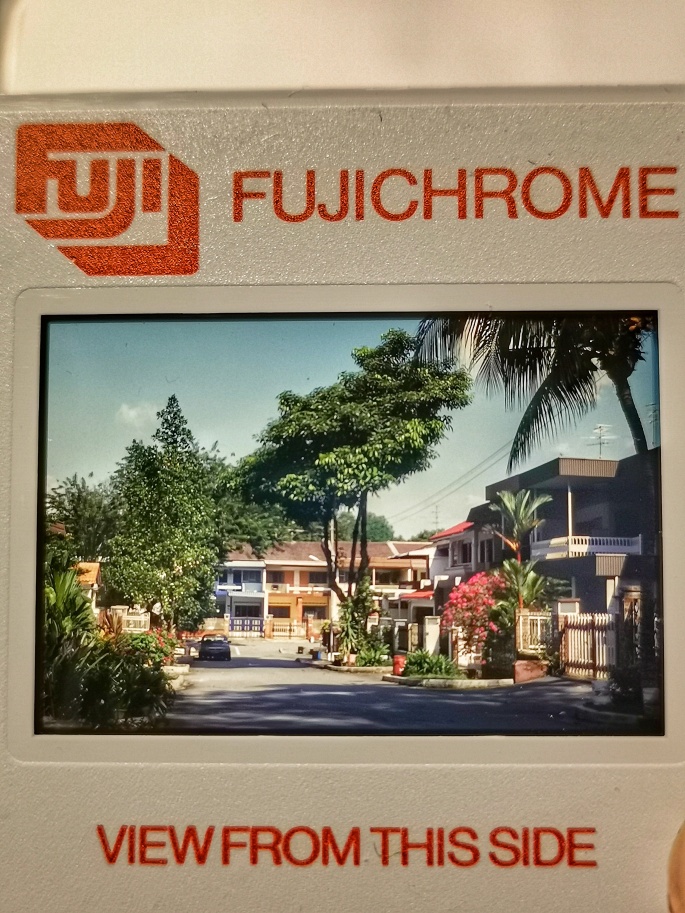 So, I’m not sure I 100% agree with Mr. Sugimoto’s quote, but from what he’s saying does this make me an image thief… or more like a hospitable man offering a place of refuge for these orphaned photos, so they can continue their life and also to preserve their memory? Anyway, let me explain…
A couple of weeks back, I bid for a job lot of 35mm projection slides on ebay from the early 1990’s, and won the auction. (Hell yeah 😛 ) I was pretty stoked about winning as all the images seem to come from a collection of some unnamed photographer’s adventures in Asia and Africa, and as far as I know they haven’t been seen for 30 odd years… There are some from China, Malaysia, Morocco, Singapore etc. Featuring people, places and culture from the time period. My initial intention in buying them was mainly one of intrigue, but also I thought that if they were suitable enough, I wanted to digitise them in a high quality format. Turns out, most of are really beautiful and it’s so interesting to see and own this unique collection of images. Most of them seem to be dated from 1991 to 1994, which is when I would have been aged 5-8 living in the UK. I always had a fascination with different cultures and dreamed of travelling both to Asia and Africa at that time; (obviously world travel at that age would have been pretty ambitious, and I still haven’t got over to Asia yet), But being able to place myself in space and time at the same time that these images were taken, and having access to viewing someone else living my childhood dream at the same time as I would have been dreaming about it… is a strange and wonderful experience. Below I have taken some photos of some of the slides via my phone camera ( Huawei Mate 20 Pro) so you can see the sort of images I’m referring to. I will be purchasing a decent flatbed scanner which is able to scan at least 4000dpi x 4000dpi as this is the minimum resolution suitable according to my research in the process of digitising slides. If anyone has any knowledge in this field, or any unseen/ disused collections of images from this time period…please don’t hesitate to contact me.
I hope you enjoy these images for the time being. 🙂 –

Over winter, I have tried to discover and define a visual style to my work, bound to the nature of loss and that which is lost. A meandering discourse of grief,  happening upon the transitory, malleable nature of meaning. I have captured moments of recollection and mundane epiphany in photographic syllables that form the beginnings of words, but do not quite describe for me the isolation of being in this state, like the babbling of a child who has not yet formed the skeleton which underpins language. Mark-making with light and lens is intrinsically linguistic and descriptive and I am finding that photography has a broad vocabulary which I was previously unaware of.  I am inclined to steer away from the more obvious visual symbolism related to the subject matter of liminal space and grief, as this experience is personal and I do not want to tarnish the work with these sort of visual tropes, nothing during this time has appeared to be obvious to me, so why should the viewer hold all the clues? It seems counter to my objective to resolve these themes in my final images. 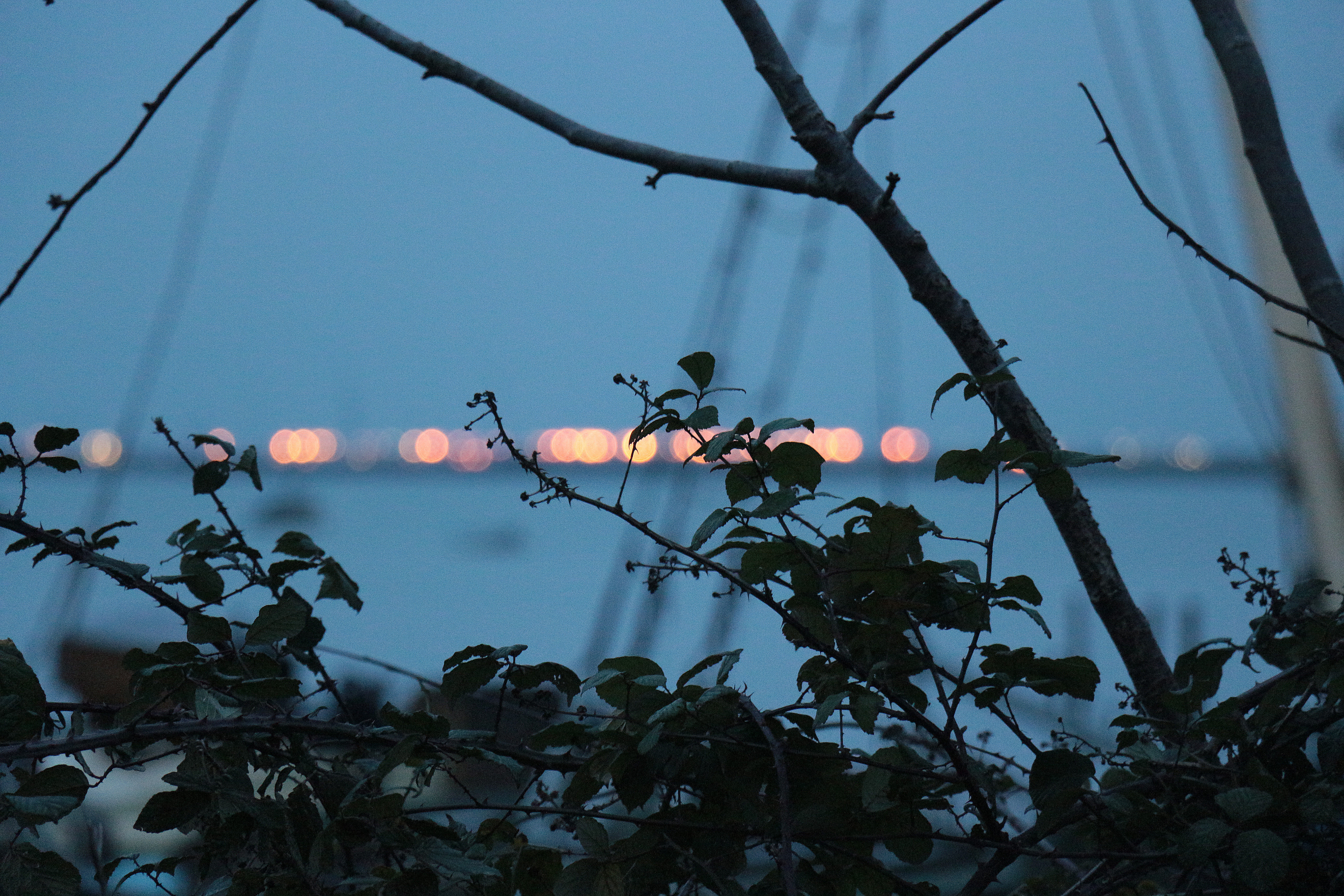 So, I’ve been pretty busy with work and constantly thinking and refining ideas for my project and my essay, but also I’ve been sort of lost on what I really want to say with my project, and also in life generally after a lot of tragedy in my life over the last couple of years. I guess that when you feel like that, you subconsciously start looking for signs, for some direction and grounding, which can become quite surreal at times. I eventually realised that this in itself is a good starting point for my project. Being in that head space, exploring the ideas associated with attached significance to objects and events when maybe they would have been completely overlooked before. Sometimes this can be a huge hindrance to progressing, but sometimes you can find moments and meaning in things that can turn out to be beautiful and life affirming.
So I visited UCA library and took out a book by Peter Granser called “Signs”

I found this book very helpful as an initial waypoint, and was intrigued by the titles of the contents ” The Impossible Un-Ambiguity of Signs” and “Lone stars, Lost amongst the Big Bang”
I feel the seemingly unassuming images tell a lot when framed within this context.
At some moment in time, these scenes held a lot of meaning for someone.

I also rented a book called Punk in Print, I have always been interested in certain aspects of punk mentality and in a sense it ties in with the idea of being lost, as punk gave identity and voice to a generation of people who felt “lost” there are definitely ideas within the genre which I want to explore further, although I feel like it shouldn’t be a main aspect of the work I produce.

At this point, after going on a few walks and journeys, down roads I’ve never been down and to places i’ve never been to. I realised I had collected reference and subject material for locations, styles and compositions that intrigued me. I had an idea forming.
I needed to go about collecting things for the images I wanted to make. So I got to ebay, after paying an outstanding fee I had on there from when I used to sell antique coins.
So now I am waiting on some items, exploring the idea of being “lost” as an overarching theme, whilst exploring some more nuanced material that I want to try to capture in the images I will go on to produce.

From the tutorial I had about my essay, I described and discussed my themes and the challenges I have had settling on a title. It was very productive having a second opinion and some other input on making sense of these abstract ideas that I had been having.

In anthropology, liminality is the quality of ambiguity or disorientation that occurs in the middle stage of rites, when participants no longer hold their pre-ritual status but have not yet begun the transition to the status they will hold when the rite is complete.